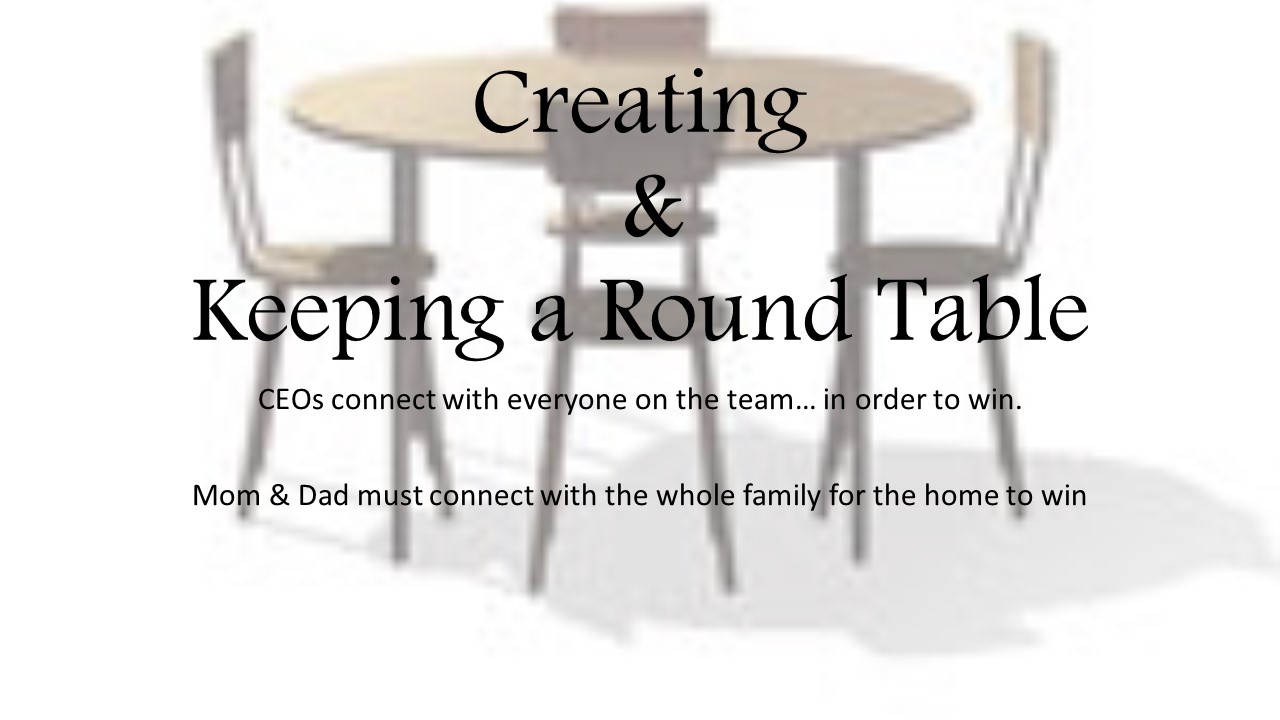 Growing up, I’ve been curious about how other families do what they do. I always thought ours was special. In time, I came to realize that our family was just like any other family. We just wanted to get on with life.

Of course, each family went about it their own special way. This is why each family has their own unique vibe and culture. After reading the book “Rich Dad, Poor Dad”, the question came back with greater urgency. Is there something I need to know for when I create my own family that I might not know because of the family in which I grew up?

Today, as I sit and write this post, I’m pondering some of the lessons I’ve learned and the application thereof in my day to day life. Without diving more into my inner thoughts… let’s get into the post of the day.

Several mentors and peers have mentioned the use of a round table at their home. The process ranged from democratic to autocratic with regards to structure. I knew nothing of the sort.

To me, a round table discussion was what happened at church… after service. A panel discussed a topic, then people weighed in with questions, then the panel wrapped things up.

In my house, the round table was not called that. It was the occasional meeting to review the year or address a behavior the parents did not like.

Then, I had someone from another culture break down the familial round table in depth. Sadly, to me, at the time, it was a bit humiliating. I was the MC at a wedding and I did what I knew to be the right thing when calling out tables for people to eat. Then, one guy came up to me very upset and pulled me aside and gave me a talking to.

Before that moment, to me, one called the most important people in the room to eat first. Then, worked your way down the list of importance until you eventually got to the children table. (I was a young eager MC at the time)

His point was very valid and was not lost on me. I learned a humbling lesson in leadership too. A lesson that has changed my approach to a lot of things in life, including how I MC events.

Children and elderly get to eat first. It’s a respect thing for the elderly and it’s a compassionated thing for the children. They can’t stay on their hunger like adults can. Especially at a very long wedding day event. It’s cruel to make them wait for left-overs and scraps. The rest of the adults can definitely wait a bit until the children have been served.

Shortly after that experience, someone else took time to describe how their home round table meetings went. That totally blew my mind. I love the concept. Now, I’m sharing it.

A Proper Round Table

In some business context, the leader or power broker sits at the top of a long rectangular table. The hierarchy is set by who gets to sit closest to the head of the table. The least favored seat is at the bottom of the table.

Other leaders, in order to appear more understanding of their “underlings” will often sit at the center point of a rectangular table. Think the “Last Super” scene. This way, the power divide and hierarchy is a bit more flat and even.

Teachers have long understood how children respond to the appearance of favoritism. They usually sit the children around a crescent table so that they each have equal access to the teacher (for the days when class room sizes were much smaller and there were more than one teacher in the room).

Some parents have used the notion of two tables at home. One for the adults, one for the children. Usually around holidays and big gatherings. I always hated being at the children’s table. I missed out on all the cool chats and information about the way the family was moving. The day I graduated officially was a huge day for me.

In the families who had regular round table discussions, I noticed many had actual round tables for everyone to sit at. Everyone was treated as equals. Everyone talked and shared their opinions.

I had to ask about the discussions around topics that were not age appropriate… like money. The way I was raised, a child of any age should never enter a discussion on money or sex with his parents. I assumed that was normal. Turns out, these families did. There was adjustments made for the math/maturity the child understood, but they all knew something about the home finance… and eventually procreation.

This was scandalous to me. In the culture I grew up in, a child is forbidden to know about the finances of the house. That is reserved for dads and smart moms only. If one was not considered a smart mom, she was not even allowed to know about the home finances. (several cultures seem to hold that view in case anyone is surprised)

Many other topics that I assumed were off limits were discussed. Example, the children got to select the family vacation every now and again. They got to plan some of the activities their family joined. They got to set the budget for holiday gifts and they were expected (as they got older) to shoulder more of the economic responsibilities of their activities (like a cell phone or trip across state lines).

Those families that had proper round tables going often had their children eat at the adult table. If the children ate at a separate table, they often got to eat first before the adults.

I took a while to accept this incredible out-of-this-world reality.

Before getting into how to set up such a deal at home… it would be decades before the full gravity of this shift hit home. All of the children who grew up from stable well adjusted homes that had round tables now appear to be doing far better in their lives than those who didn’t. They’ve got better everything across most of the metrics that seem to matter to most homes. Their children also seem to be out-performing the children of parents who didn’t have such round tables.

these are anecdotal evidence being presented. Other authors have presented empirical data that seem to support this notion as well

The question then is… how do I set up such a deal in my own home so I can get the same types of benefits. Especially if I’ve not had any role modeling of this in my entire life.