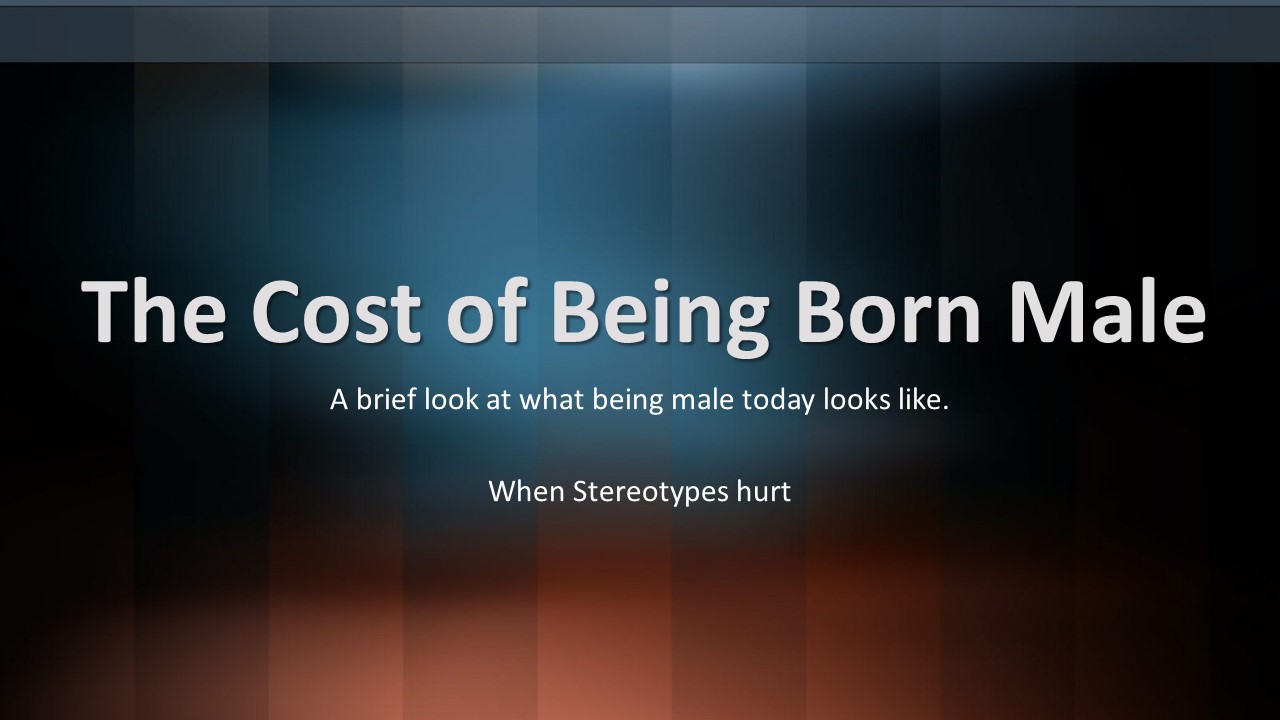 The human lotto has it that globally, the ratio of men to women is nearly split evenly. The value of your gender at birth will vary greatly based on where you’re born and the economics of said place. Generally speaking, it is understood to be a good thing to be born male.

Let’s not get into the biology of what gender is tougher for survival, female, because that’s more science than this post requires. Let’s not get into how society shapes the outcomes for a gender as this would entail more politics than this post needs. Bottom line, all things being equal, is there really a cost to being born a male in Western cultures? 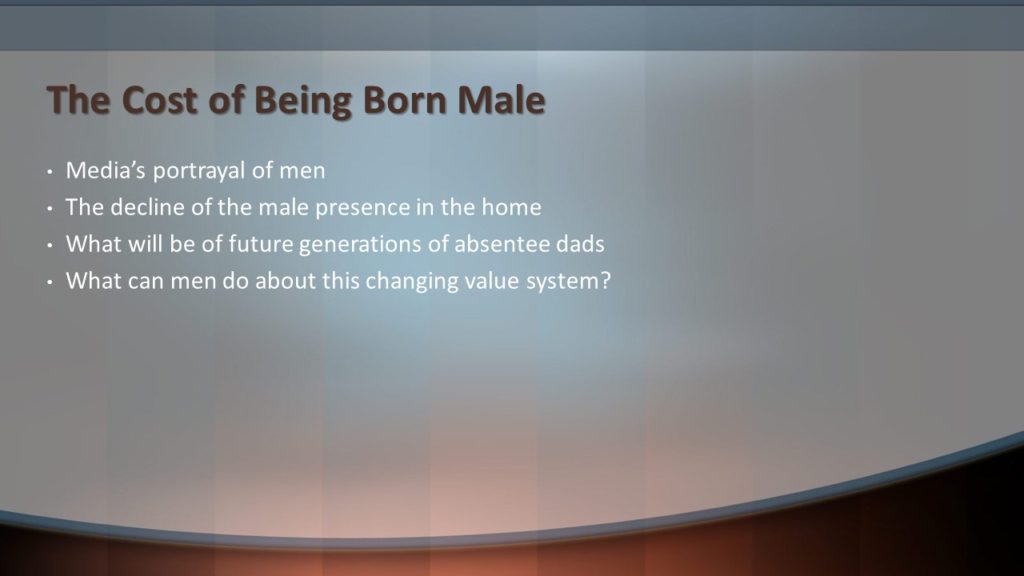 The current social climate seems to superficially favor males. They’ve got the freedom to run around and do as they please. They’re told to spread their oats far and wide because that’s the right way to be. They’ve got many institutional advantages that allows them to live as they want to. There should not be any adverse effect of being born a male.

If one was an alien and had to look at media to understand the specie, it would become very clear that men are bumbling stupid idiots who can’t do anything right in their adult form. Even technology stumps a grown man.(to think, there was a time every man knew how to program the VCR and change tires of his own car) Forget changing diapers.

The social value of a man has significantly dropped over recent time. The good old fashioned patriarch who knew best is a thing of the past. Clamoring to hold on to power in leadership is under severe challenge as company boards are looking for diversity and more women in leadership. The advantage men have is not yet gone but is going away fast.

Cases of divorce seem to emphasize how wrong it is for a man to have custody of children. Seeing a dad go to PTA meetings is almost newsworthy shocking. Health care choices for children are mostly directed to the moms.

Women, according to a podcast called Feak-o-nomics, go to school at a higher rate then men. They finish advance degrees at a higher rate then men. They continue to fill their educational resumes at far higher rates than men. The effects are starting to be shown in many sectors of the economy where women are coming out of college and graduate schools earning more than their male counter-part because they have reached for more.

The ramifications of this for marriage, leadership in the home, parenting, social mobility, longevity, and health… needs to be discussed. With the marriage rate declining significantly, it is possible to see that future homes will have less marital structures as there may be even less qualified guys for these gals to marry.

Where is the price of being born male?

In the aforementioned concepts, the price is measured in respect. The men are losing value in the respect domain. On the podcast EOFire, a coach said that women respond to love and men respond to respect. The person who can deal/deliver accordingly wins.

With men losing respect, their self image, their self worth, their drive for success, their ability to lead, their willingness to co-lead a home, and their understanding of how to do their part at home drops.

Men pay with the very notion of respect that they need in order to act respectfully. When guys stop feeling respected, they tend to stop trying as hard to do respectful work to be more respectable. (what a catch 22) Example, keep putting down a man about his abilities in marriage, in time he will stop trying the very thing one wants him to improve, thanks to the put-downs. No one gets a guy to take out the trash willingly or joyfully by repeatedly putting him down and insulting him about taking the trash out. (this does not take away the personal accountability variable that men need to understand. This is not a pass)

Wait… you said respect, what is this “put down” thing then?

While most men can take jokes very nicely, over time it gets annoying to hear the same joke over and over. Most men, historically, were known as being tech savvy around the house. To see on most television shows, talk shows, media outlets… men being portrayed as unable to program their own phones for the sake of humor is getting annoying.

When your woman starts treating you like a child because that is the stereotyped understanding about how men, that eats at your drive to do things for your wife. Not feeling respected for your contributions often means saving that energy for something else. (Have a belittling wife nag you all the time… and place a supporting encouraging believing female coworker… you get temptations brewing hard and fast)