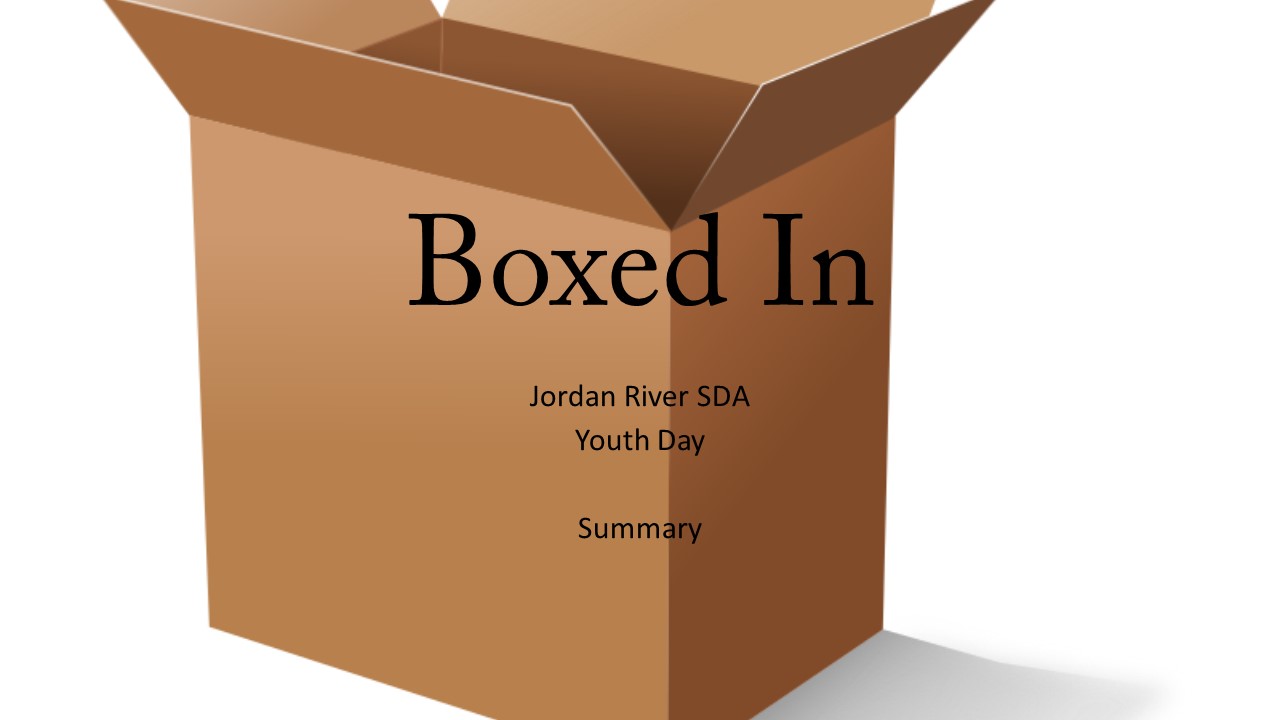 It is a pleasure to be asked to share in your youth day. Seeing the growth and evolution of this church at a distance has been encouraging. Two groups joining forces… making the best of a set of circumstance… and in unity focusing on the ministry is beautiful.

I encourage you to keep growing in the Lord. The efforts you’re doing to keep the truth across generations is admirable in a time when truth is highly relative.

The sermon for this lovely occasion is called “Boxed In” based on the story of Daniel in the book of Daniel 6. The text worked around the 10th verse.

For those who have missed the live presentation, here is a brief summary of what was spoken. Before the summary, will add one more thing, the blog post associated with this page will cover a different take on the sermon as a value add. Feel free to leave any comment you’d like about both at the end of each.

Many people have worked hard to move up from their station in life. As a congregation filled with either first or second generation immigrants, the context of how Daniel ended up in Babylon is closer to home than many other audiences will appreciate. The rise up to the top is the main aspiration for most young people.

With each ladder of success comes a measure of confidence and pride. Even comfort. Especially when one is able to rise faster than the competition. Sadly, in the rise to the top, a lot of people encounter a lot of resistance.

So much so that there are various glass ceilings and concrete walls that prevent minorities to reach the fullest of their potential.

When such a person makes it to the top, they have to constantly be vigilant of the conspiracies, the lies, the threats, and the setups to make them fall. Many compromise their values that got them to the top. Others compromise in order to make it to the top.

The journey to the top means understanding the rules of the game and playing better than the competition. The Devil is keen on watching those who rise fast and far under the flag of Jesus Christ. He will attack them most viciously as their public fall will bring most disgrace to their cause.

When Daniel was face with the ultimate test of his faith, he had to decide which way to go with his beliefs. Many would not have faulted him for bowing under pressure and taking his beliefs back into the closet. No one would have been upset if he had opted to pray privately instead of at his open window.

The haters had pushed a pork barrel sweetheart deal into law punishing anyone who worshiped another god or God with death. They were only to worship the king. They had played on the king’s ego.

Now, Daniel is boxed in. He’s a veteran decorated leader. All eyes watching him. He opts to keep true to his core beliefs that got him success in the first place. He prayed to God and kept his faith as business as usual.

He understood that it could cause him his life. He understood that it would destroy his impressive decorated life. He also knew where he had come from and had seen how God had delivered him in the past. He had survived other royal administrations in his career in Babylon. He trust that God would see him through one way shape or form. Even if that meant retiring from this world via premature death for not obeying a human law.

Most people would not stand the test that Daniel had. Most people aren’t able to withstand much pressure in their day to day life. Why? They’ve not prepared.

The strength of character takes time to build. The habit of faithfulness takes effort to master. We do not put much energy into building our faith walk. We don’t put much time into understanding our hard stops and our bright lines.. We don’t take time to know what we will say yes to and no to. Therefore, when push comes to shove, we go with the flow.

Daniel understood that the sentence was death by lions. He also knew that the same way God had delivered him and the three Hebrew boys in the past, God had the option of doing it again. Same with the furnace incident. Daniel had a track record of knowing God and trusting God. He also knew that death was not the worst thing that could happen to him. Being put to death while not in harmony with God was far worse, because his eternal salvation would be lost.

One can suspect that in prayer, Daniel made sure his life was right as well a prayed for his enemies so God would show them mercy for falsely setting him up for failure.

As the story unfolded, nothing happened to Daniel in the lion’s den because God protected him. When God’s name is called into question and your life is right with him, He often will chose to make His glory shine by delivering you.

Please note. God is not obligated to save your life to have His Glory shine. Just look at all the disciples who passed away before their time… their names are known to this day as huge influencers of the spread of the Gospel… because of they’re martyrdom.

What is interesting in the story, those who conspired to bring Daniel down did not make off harm free. They found their fate in the same den they had prepared for Daniel.

There are times, when people box you in, they’re actually setting their own traps for themselves. The key is not to partake in their drama and let God handle the karma.

The bulk of the sermon’s information was reserved for the live event. This summary only touches one small part of the conversation. However, the hope is that through this summary, you gain encouragement to stay true to your beliefs. Provided those beliefs are anchored on truth. As in the truth of the Bible.

Holding strong stances on relative or unchecked versions of reality puts one at risk of standing for falsehoods. The haters worked hard against Daniel because they felt they could not compete on a level playing field. They had to cheat and lie to get ahead. In the end, their lies proved to be their own undoing. Their schemes blew up in their face.

Had they worked on their own skills instead of hating on others, they would not have had the early demise they did. When you examine your life, are you competing against others or working to be the best version of yourself you can be? Are you taking time to understand the divine plan set for your life and making it reality?

When life seems to box you in, do you cave under pressure or do you go back to your fundamentals and trust God to carry you through? Do the work. Do the goal setting. Put in the time. Don’t coast on luck. Boxes will not hold one that God has promised open land to. Boxes are temporary.

In a manner of speaking, all the magic happens outside your comfort zone. That’s the popular saying. When people box you in, they’re trying to keep you in their idea of a comfort zone by making you feel as if you’re uncomfortable not being in the box. Reality, you’re feeling discomfort because you’re not designed to be boxed in. Trust God to set you free for their boxes. Don’t settle or compromise by accepting their boxes.

He lived to tell the tale. They tried, but they ended up boxed up and fed to lions for an early end.

Enjoy the blog that’s associated with this page that further supports the theme. It will be geared more towards parents, as this blog is focused on leading a family.

Thank you for visiting. Hope to see you soon on the blog and from stage as well.